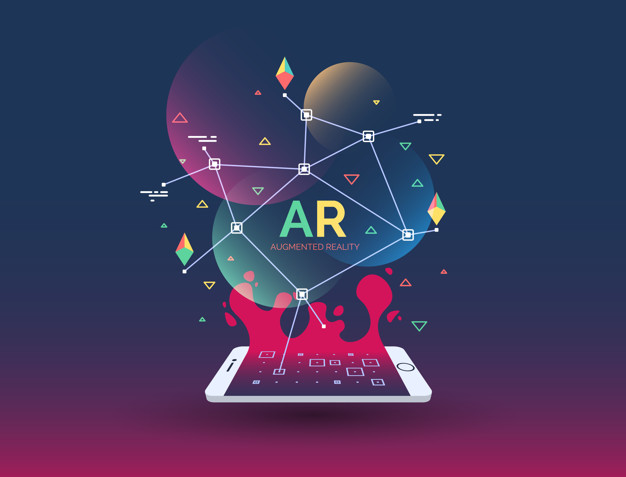 Augmented reality is currently being leverage heavily by mobile apps of all types. The most common such example of a popular game app successfully utilizing this technology is Pokémon Go. The game took the world by storm upon its release as it allowed users to experience something that they never could i.e. their gameplay superimposed on to their real world. This really shook things up and opened up a whole new world of possibilities on how this technology could be utilized in other apps.

Even though Augmented Reality is considered more of a future technology, it is currently readily available, and we are using it in numerous ways in our daily lives. Take Snapchat as an example; ever wondered why Snapchat lenses workaround so smoothly and accurately with your facial movements? That is no rocket science. The app integrates the augmented Reality with your smartphone's camera functionality.

The Viola Jones algorithm, which is now being used by Instagram filters as well, allowed Snapchat to use AR in its app and reach super success in a very short amount of time.

Let's talk about what Augmented Reality (AR) is.

What Is Augmented Reality (AR)

Augmented Reality is a digital technology where the developers enhance real world experiences with the help of computer-generated input. This input responds in real-time with the actual environment of the users.

We often confuse Augmented Reality (AR) with Virtual Reality (VR), but technically that is not the case. Virtual Reality is where you are surrounded by and interact with a computer-generated environment. In comparison, the Augmented Reality enhances our real-world experience by adding digital layers that respond in real-time with the environment rather than completely changing it. These digital layers could be sounds, visuals, auditory, GPS overlay, and other sensor information.

Perhaps the Pokémon Go is the most famous example of an AR application where the environment doesn't change itself, but the visual graphics like different Pokémon popup from almost everywhere bathroom to a road's sidewalk.

Judging from the massive success of Pokémon GO and Snapchat, one can easily conclude how successful can an Augmented Reality based app becomes. Here is a list down of 10 AR-based application ideas that you can leverage for your rnext app project.

With millions of people trying to find out their soulmates every day via apps, online dating services and apps have become one of the most popular internet segments today. One of the most famous examples is Tinder. Dating apps can use Augmented Reality to judge people's interest level for each other based on their conversation. Also, unlike traditional dating apps where you can only see a person's picture, Augmented Reality can determine the overall physical appearance and personality of a person, enhancing the overall experience.

Apart from the users, brand owners can also avail of the excellent benefits of AR-based applications. People can easily find out details like prices, unique characteristics, discounts, and special offers on a product using AR-integrated camera apps. If used creatively, AR-based marketing apps can quickly catapult a brand into popularity and develop a loyal customer base.

A notable concern for most people before purchasing goods is how they would look in their rooms. For example, let's take furniture; you never know if it suits your space unless you put it in there. With an AR-based visualization app, you can technically find out where and how each piece of furniture or other goods will fit your room via visual images. You can also add features like the color selection to make the purchase decision much easier for the users.

Before treating patients, a surgeon has to go through years of practice because there is no chance of mistakes whatsoever. Medical training apps integrated with AR will allow the surgeons to learn and practice more efficiently as they will have real-world experience of surgeries and diagnoses. These types of AR-based apps could be highly beneficial for inexperienced surgeons and doctors.

When it comes to sports, many people just like to watch the game. Others are much dedicated to the game as they want to have every single detail like game statistics, player profile, and much more. AR-based sports apps allow such viewers to have real-time information alongside the game itself. This information could be almost anything related to the game like the ball's trajectory, speed of a player, his name and profile, etc.

Now this one could be an excellent pick, as most people are worried about doing something wrong with their product despite having a user manual. AR-based user manual apps could deliver an immersive 3D walkthrough experience of a product. A step-by-step visual demonstration of a product's working could be highly beneficial for people with DIY purposes.

AR-based magazine apps could genuinely change the way we read. Users can leverage these types of apps to get a visual representation of characters and their movements by scanning codes or images with their phone cameras. This approach could also be implemented to the educational books to make the learning process more fun and engaging.

Now this one is quite similar to the AR-based visualization apps. The key difference here is that unlike the visualization apps where you can see the visual images of goods to be placed in your house, you can see how things would look outside the house or on a land block before you build them. This type of app will also aid users in determining the total cost of goods to be placed.

Tourism apps integrated with AR are nothing less than pocket guides. These types of applications can give you an excellent exploration experience by providing you all the information about the places or museums you visit. Let's say you are in a museum. All you have to do is to point your smartphone's camera at an object, and all the information related to its history will pop up on your screen.

Data analysis and statistics are a tough job for any business or brand because it is purely a game of numbers. This is the reason why the charts and tables are made for making data simpler to understand. Data visualization apps can help understand the progress and other business statistics by creating 3D visuals of graphs and tables. All you have to do is put the raw numbers into the app, and it will do the job for you. These types of AR-based apps can take a business to the next level on innovation.